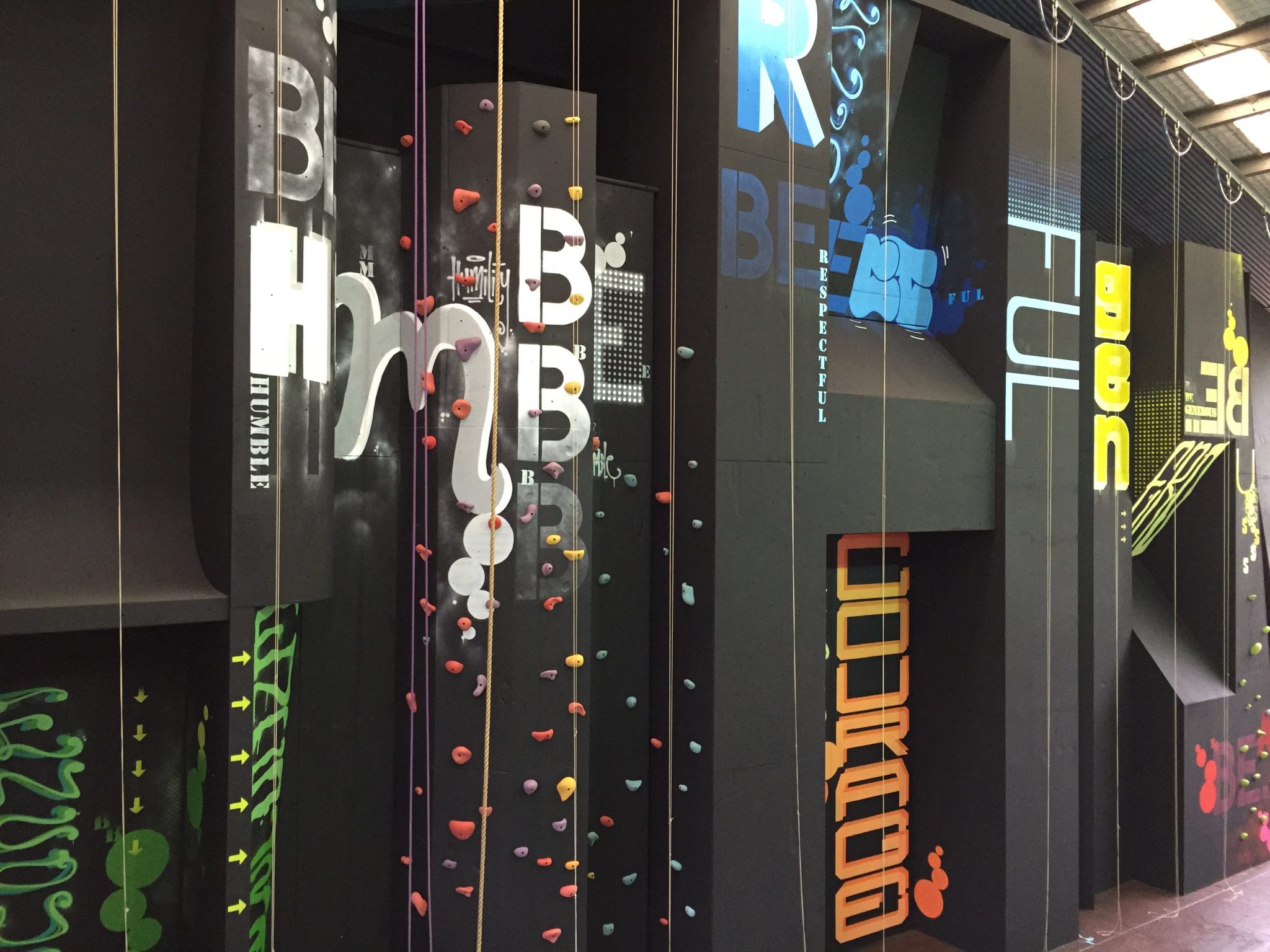 The Climbing Wall at QCCC Mapleton, one of the Sunshine Coast’s larger Outdoor Education Centres, has been getting a remarkable summer face-lift ahead of another busy school year.  The wall at Queensland Conference and Camping Centres (QCCC) Mapleton is 10 metres tall, 18 metres wide and has 50 different climbing routes on a double-belay system.  The site caters to 20,000 school students annually making it one of Queensland’s busiest school campsites.  In place for more than 15 years, the Mapleton climbing wall is close to a rites-of-passage for South East Queensland’s school children, introducing them to the joys of rock climbing in a safe and supervised environment.

After two government-operated sites were given large taxpayer subsidies to build competing climbing walls the Mapleton version had come back to the pack.  Due a re-paint as part of routine maintenance, Mapleton’s Outdoor Education team pitched an idea to the site’s management to once again restore the climbing wall to its premiere status.  Rather than re-painting in the traditional yellow/brown colour, staff scoured the internet for photos of climbing walls all over the world to come up with a contemporary option. The Climbing Wall before its new look.

After QCCC’s experienced maintenance team repainted the wall jet black, the stage was set for local street artist Zac Brasch, a long-term supporter and attender of camps at QCCC Mapleton.  Zac proposed the idea to emblazon the surface with the words contained in QCCC’s values-based teaching tool, their R1202 Hand.  R1202 is used in group contracts and de-briefs in their award-winning Outdoor Education programs and Zach thought these principles would be a good fit for the wall.

Over the summer the wall has seen an extensive transformation into a funky black façade with six values scrawled across them in street art style.  The climbing holds are being restored after a good scrubbing and they stand out from the wall in neon relief.

QCCC Mapleton manager, Andrew Maynes, commented: “I’ve enjoyed visiting the wall each day as it has been transformed.  Zach has taken a standard and ordinary looking wall and made it into something world class.  I think when teachers and students walk into the climbing wall room this year they’re going to gasp with wonder.  This is truly a remarkable transformation.  Zach’s art style will also have them working hard to make out the words and find the hidden details buried all along the wall.  There’s a lot for them to take in while they wait for their turn.” Zac sees the wall as one of his defining works: “I probably underestimated just how big a job this would be.  Not only is there more than 200 square metres of wall, the nooks, crannies and folds meant this was far more challenging to work on than a straight surface.  However it also let the imagination run wild and now the holds are being restored to the wall it really does look amazing.”

The innovative makeover of Mapleton’s Climbing Wall will cost just $6,000 and will be complete before the start of the busy school year.  QCCC Mapleton will host more than 220 school groups through next year and the climbing wall will be an amazing memory for them.  With the Sunshine Coast already established as a significant national hub of Outdoor Education, this climbing wall makeover affirms the region’s reputation for innovation and creativity.